An excellent question. Why is a barley wine called a wine, when it’s so very clearly and marvellously a beer?

For a detailed study of the history of the term, let’s look no further than this excellent exposition by my friend and colleague Martyn Cornell http://zythophile.co.uk/2010/09/14/so-what-is-the-difference-between-barley-wine-and-old-ale/

The Campaign for Real Ale, meanwhile, tells us that “Barley Wine is strong – often between 10% and 12% – and is traditionally stored for 18 months or two years. Expect massive sweet malt and ripe fruit of the pear drop, orange and lemon type, with darker fruits, chocolate and coffee if darker malts are used. Hop rates are generous and produce bitterness, as well as peppery, grassy and floral notes”.

So, it’s not too difficult to establish the “what” of barley wine, but that doesn’t really tell us the “why”. It basically, I suspect, comes down to pure snobbery. Wine gets a very easy ride compared to beer in terms of social acceptability. Acres of print, or whatever the digital equivalent might be – servers of megabytes? – are devoted to examining the merits of wine and considering it as a match for any and all food.

This preferential treatment given to wine is nothing new. Some biblical scholars have suggested that the beverage that so unfortunately ran short at the marriage feast at Cana, prompting Jesus’ most famous conjuring trick, was more likely to have been a strong beer. Later translations, runs the argument, decided wine had more cachet and fiddled with the text.

Regardless, it’s easy to see that a brewer, having used premium ingredients and gone to the expense of storing their beer for a considerable time, would want to get a decent price for it. If calling it a wine rather than a beer persuaded enough people to cough up that all-important extra few shillings, then it’s easy to see why the term was used.

What this all means is, that in any beer writing, there’s a temptation to resort to the vocabulary of wine. Even bottle caps are traditionally called ‘crown corks’ in the trade. However, given that most people’s level of wine literacy doesn’t extend beyond  ‘red with meat, white with fish’, there’s really plenty of scope for beer to forge its own path in terms of the conversation. 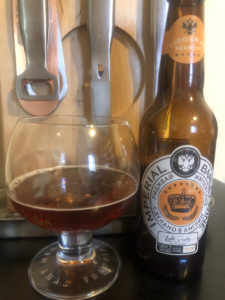 To business. This particular barley wine is a 2012 vintage Imperial Barley Wine from Ridgeway Brewing of Reading, bottled at 10% ABV. This is one of a couple of different bottles given to me by brewer Peter Scholey at the time. From memory, it was intended for export – and the Cyrillic script on the bottle also tends to suggest that. Again from memory, and Peter will correct me if I’m wrong, Ridgeway was having trouble finding UK stockists for its strong beers at t time, although was doing well with exports.

The proliferation of specialist beer retailers in the past few years may have changed that situation. Or not. Beer is still almost unique as an alcoholic drink in that drinkers shop by ABV, checking the strength on labels and pump clips carefully before making their decision. You rarely see someone turn a bottle of wine around and check the strength in the same way, yet in most cases, beer is the least alcoholic of alcoholic drinks in their repertoire.

Aroma: After that reassuring hiss on lifting the cap – not cork – there’s a deep malty, almost meaty character to the beer’s aroma. A further sniff brings the sweeter malt flavour of Shredded Wheat, followed a sweet, treacly waft at the end, like strong, sweet Turkish coffee. Poured into a wide bowed glass, there’s also a sherry and citrus note.

Appearance: The beer pours with a light sparkle. The head is restrained, but the liquid lingers on the side of the glass with a lazy, sticky reluctance that suggests, after eight years in the bottle. It’s really in no hurry now. Held to the light, the beer is a light amber colour with a striking clarity.

Taste: Taking a sip, the first flavours that hit me are very different to those on the aroma. There’s a sticky marzipan character, some honey, and then a superb spice and pepper finish. It’s only on the second mouthful that the malt from the aroma arrives in the taste. The carbonation is very light, but that reflects what is a surprisingly delicate beer. It’s very refreshing without losing any of its complexity. The final pour is cloudier as the yeast find its way into the glass.

Overall, this makes me wish I had a few more bottles stashed away. What I do have is a bottle of Ridgeway’s Imperial Red Ale from the same period, and hopefully we’ll get to that as the lockdown continues.

I love a decent wine as much as the next gourmand, but there’s no more value in appreciation terms in calling this wonderful beer a barley wine than there would be in calling a great rioja a grape ale. Cheers!