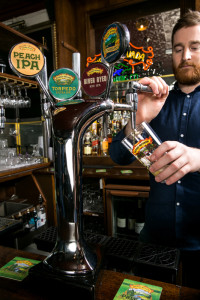 There is much talk of consolidation in beer circles at the moment. It seems to received wisdom on both sides of the Atlantic seems to be that the craft beer boom has left us overbreweried, which will inevitably lead to the big global players snapping up bargains by buying out the biggest craft players, while many of the smaller ones will simply fall by the wayside.

I’ve no real idea whether that’s true or not, and no strong opinion on whether or not it’s a bad thing if it is. Anecdotally, I know that a number of smaller brewers in the UK have quietly shut up shop recently, but it’s hard to say if that’s a trend. The nature of business failure is that breweries tend to arrive with a PR fanfare and depart with barely a whisper.

Equally, I know craft purists who vowed that not another drop of Camden Town Brewery beer would pass their lips after the business was sold to AB InBev in 2015, and who have sworn off BrewDog since its founders sold 22% of the company to private equity firm TSG Consumer Partners earlier this year.

Personally, I find that I can enjoy Meantime IPA just as well now that the merry-go-round has stopped and it’s owned by Asahi of Japan, and I have no doubt I’ll continue to enjoy a pint of Young’s Ordinary when Marston’s takes over the brand just as much as I did when Wandsworth’s finest first moved to Bedford under the stewardship of Charles Wells. I’ve worked with at least two entrepreneurs who’ve swanned off with a few mill as a result of flogging the fruits of their labours, and I don’t begrudge them a penny of it – “although the fact that I’m still working and they’re not is a good indicator of the extent of my own business acumen.

Nevertheless, it’s also good to know that there are independent breweries out there that stick to their guns. So, I was delighted to accept an invitation recently to a beer and food matching dinner at south west London’s temple of beer, the White Horse at Parson’s Green. The event was hosted by Steve Grossman of California’s Sierra Nevada brewery, one of the true pioneers of the US craft beer movement. The event was part of pub group Mitchells & Butler’s summer craft beer festival, and an opportunity to sample some Sierra Nevada beers we don’t see as often over here as the Pale Ale or Torpedo Extra IPA.

Founded in the 1970s by Steve’s brother Ken, over the years Sierra Nevada has built a repertoire of seasonal and speciality beers, with its passion for hops at the heart of its programme, that keep it’s loyal customers coming back for more. Sierra Nevada remains resolutely family-owned, with a new generation of Grossmans now coming into the business.

Steve admitted to me they’d had some “interesting conversations” with bigger players over the years but, in line with the brewery’s commitment to sustainability and long-term investment –  Sierra Nevada has won awards for its approach to energy and water use at its two US breweries – there are no plans to change the ownership structure. 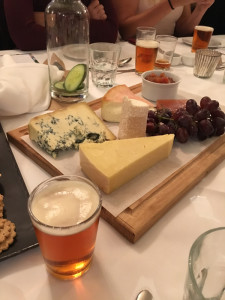 Given that Sierra Nevada Pale Ale is a top 20 US beer brand, the Grossmans seem to be doing a pretty good job without outside funding. In the UK, the beers are distributed by Fuller’s, with the flagship beers now a standard part of the back bar fridge range in Fuller’s pubs.

The menu at the White Horse was:

Of the beers themselves, the Sierra Nevada Torpedo Tropical IPA Â is definitely one I’ll seek out again. Made with Amarillo, Mosaic, Citra, El Dorado and Comet hops, it has wonderful flavours of mango, papaya, and passionfruit to counter the intense hop character. River Ryed has real pepper/spice notes that would, I suspect, make it a beer that would go sublimely with a vindaloo.

Of the food matches, the kitchen team at the White Horse produced superb food, with Sierra Nevada Peach IPA sorbet a real highlight. However, they saved the best for last. The cheeseboard, especially the Colston Basset blue cheese, was an inspired match with Torpedo Extra IPA, with the intensely bitter Magnum, Crystal and Citra hops a true contrast to the rich, sticky sweet/savoury cheese.

So, long may Sierra Nevada stay independent.  Unless they don’t. In which case, f*** it, I’m still having a Torpedo with my Stilton at Christmas.