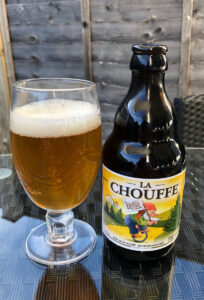 So, in a midseason revamp cynically calculated to try and boost flagging audience figures, this BeerStash Chronicle once again strays from the agreed format, in that I won’t be tasting a beer that has been knocking around my collection – by which I mean “beers I haven’t got around to drinking yet” – for years.

One of the very pleasant things about being a beer writer is that people send you beer. However, just as there is no such thing as a free lunch, there is also very much no such thing as a free beer. So, I am very pleased to say a big thank you to the lovely people at the UK arm of Flemish brewer Duvel Moortgat, who recently sent me a selection of their fine Belgian beers.

I’m not claiming that the BeerStash Chronicles are a global force in terms of influencing consumers – at least not now, although I’ll almost certainly argue the case forcibly after I’ve drunk a couple. However, if my modest contribution helps to tip the balance even a little away from bland global beers which are truly offensive in their deliberate inoffensiveness, and towards the complex, crafted brews of plucky little Belgium, then my snoring on the sofa this evening will be contented and self-righteous.

Without getting too much into a religious debate, on the basis that far too many people have already met an early end by fire, sword, axe and gun on the basis of a minor theological spat between the Pope and Martin Luther 500 years ago, the region that is now Belgium saw its beer culture diverge significantly from England’s at that time.

While our brewing monks were put out on the streets to fend for themselves, across the channel they kept up the monastic brewing tradition, creating special beers that were basically meals in a glass, in order to circumvent the many fast days in the church calendar. It was exactly the same triumph of human ingenuity over dogma that later saw beavers reclassified as fish for religious dietary purposes. 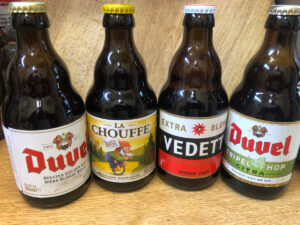 So, to La Chouffe, which is French for cabbage. While it can’t directly trace its heritage back to the monastic tradition, having been first brewed in 1982, it’s a beer in the same gastronomic tradition that you definitely feel would not be embarrassed by being served up in a baguette with a side order of frites.

At 8% ABV and unfiltered, I decide to get any task requiring a modicum of manual dexterity out of the way before cracking it open, and on a very warm day, in technical breach of beer tasting etiquette, I give it a couple of hours in the fridge.

Aroma: There’s a robust, malty whiff first out of the bottle, followed relatively sedately by a more subtle honey and lemon sweetness. The strength of the beer is telegraphed by a clean, almost clinical, alcohol character. When poured, there is even more citrus in the aroma.

Appearance: The beer pours golden, with a clean, white foam that very forgivably takes its time to settle. Despite being unfiltered, La Chouffe is delicately hazy rather than murky, indicating a brewer that very much knows what they’re doing. Unfiltered doesn’t have to mean soupy. 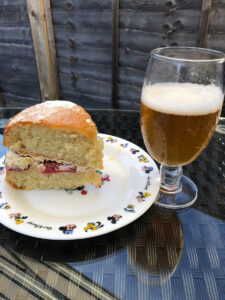 Flavour: The first hit is clove and sherbet, with a double citrus character of sharp lemon and sticky orange marmalade behind it. More subtle, but also lingering longer, is a savoury coriander note, rather than the cabbage its name would suggest. The finish is rich, reflecting the strength and complexity of the beer, but also clean.

I finish by bottle of La Chouffe with a slice of home-made strawberry and cream sponge, and the palate cleansing freshness of the beer makes it a rewarding match. I’m not sure either the Pope or Martin Luther would approve, but, hey ho, it takes all sorts.