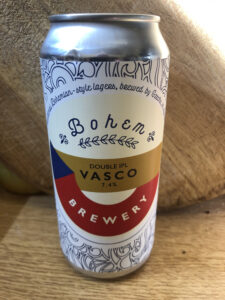 There seems to be a lot of lager about at the moment. That may well be down to several factors coming together at the same time. The coronavirus lockdown means there’s less (or no) ale being brewed for pubs, so the economies of the industry make it less viable to brew ale just for at-home consumption.

We’re also well into a warm spell, which favours lager over most other beer styles. Just as importantly, there are more brewers taking an interest in making authentic lager.

Among the examples that have found their way into my home selection recently are some classics from Budvar and Krombacher, both of which rank amongst the world’s great brewers in quality terms for me, as well as beers from two of the new wave of English lager brewers, Utopian and Freedom.

Today, though, I’m going to crack open a can of Bohem Brewery Vasco. Based, as the name implies, in the traditional Bohemian quarter of North London, the brewery is located on an industrial estate in Tottenham. OK, reading that last sentence back, it’s possible that more explanation is required.

Bohem was set up in 2016 by expat Czechs Petr Skoček, who is head brewer, and businessman Zdeněk Kudr. The authentic Czech-style beers are brewed on authentic imported Czech kit, and brewed using the decoction mashing method.

This, briefly and undoubtedly simply, is a traditional European brewing style which sees part of the mash boiled, and returned to the main mash to raise the temperature. The process is said to add the depth, complexity and flavour which characterises authentic Czech lagers.

Crucially, the beers are all stored in lagering tanks at low temperature for a minimum of five weeks. This storage, or lagering, also adds to the richness of flavour that is expected from an authentic lager.

Vasco bill itself as a Double IPL, or Imperial Pale Lager, which no one is claiming represents a traditional style beer, but it’s a name that quickly communicates something fairly hefty in beer terms. 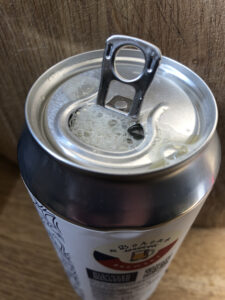 Vasco was canned at 7.4% ABV, and my particular can fits the theme of this series of lockdown blogs in terms of being a beer that ought to have been drunk by now.

The label tells me that it was canned in February 2019 and has a best by date of September 2019. However, any beer that strong should still be drinkable a mere seven months past its recommended shelf life, so let’s see.

Aroma: The satisfying crack of the ringpull sees a hiss of gas followed by an exploratory advance party of the froth that characterises Czech style beers. There’s a clean, crisp aroma to the beer in the can, with an interesting hint of orange cream behind it, richer than the lemon citrus note of a conventional lager.

I decide to try for a proper Bohemian head , pouring the beer vertically rather than tilting the glass, in order to get the two inches of foam that would be considered the absolute minimum level of politeness in any Prague beer hall worthy of the name. In the glass, the aromas open up and there’s more than a hint of tropical fruit ripeness, both mango and peach, as well as a touch of a herbal character. 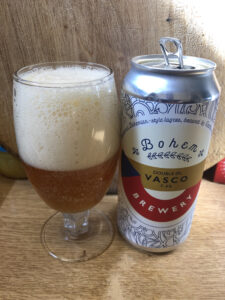 Appearance: The foam, which aficionados will tell you is where all the flavour is, reduces in size a little more quickly than would be ideal, which may reflect its age. The beer itself is hazy, but the can makes it clear the beer was unfiltered and unpasteurised when it was packaged, so clarity is not expected.

Taste: The initial mouthfeel is rich and tangy, almost creamy, but that quickly gives way to an intense pepper spice flavour delivered by the Czech hops. This spicy warmth competes with the astringency delivered by the strength of the beer to create a very clean, yet lingering flavour.

Overall, the enjoyment of my can of Bohem Brewery Vasco has not been impeded by keeping it well past its best by date, and if anything I think I’ve enjoyed a beer with considerably more richness and character than it would have had when it was canned 15 month ago.

Cheers. Or, as they say in Prague, na zdraví!