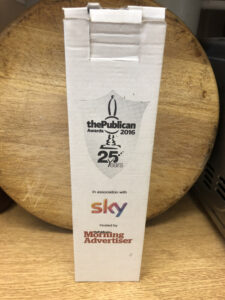 As one of those generous souls who believes in giving something back, I run the occasional beer appreciation session for chef students at Westminster Kingsway College. With most drinks knowledge in classic chef education focused on wine, it’s an attempt to at least give beer a fighting chance with the generation that will be cooking in restaurants and pubs in the years ahead.

Of course, there’s always a quid pro quo, and I’m hoping at some stage to be rewarded with the honorary title of Visiting Professor of Beer, which I reckon would look pretty decent on a business card.

Last week, I ran the course remotely via the Zoom app – and don’t we all wish we’d bought shares in that three months back? Whether it was the prospect of any diversion from the ennui of the shutdown, or, as I prefer to think, the fact that my content and presentation are extremely entertaining and engaging, it went very well.

Among the areas the session covers are beer tasting, cooking with beer, and beer and food matching, but it’s usually the question and answer session at the end that’s most fun. This time was no exception, and the topics included a debate on the relative merits of the thick foamy pour favoured in many European bars vs the thinner head on a pint of British ale, with one German student having particularly strong views on the topic.

We also discussed storing beer, which included considering the different colours of glass used for beer bottles. This is a topic on which opinion is divided. Not divided equally, but divided nonetheless. Basically, almost everyone agrees that storing beer in brown, or at a pinch green bottles, is preferable as it prevents light getting to the beer and reacting with chemicals in the hops to create stale, off flavours. 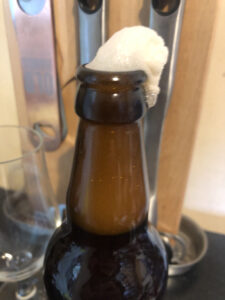 Those who disagree are, perhaps unsurprisingly, those brewers who sell their beer in clear glass bottles. They like to come up with terms like “sunkissed” as an alternative the usual descriptor of a light-related fault, “lightstruck”, in an attempt to make the flavour reaction seem desirable and even aspirational.

Which brings us to the latest beer from my <ahem> carefully curated collection to be opened and tasted in these strange times. This one is unusual in that I’m pretty confident it was never intended to be kept for any length, a belief that is very much supported by the fact that it has a Best Before date of March 2017 on the bottle. It was given to guests at the Publican Awards 2016 to commemorate the 25th anniversary of that prestigious event.

I worked on the Publican for many years, and was involved in the awards as a judge for a long time, but by 2016 the publican had been merged with the Morning Advertiser, and while the current team do their best to put on a half-decent bash, the Awards night is longer the byword for bacchanalian excess it once was.

The beer itself was brewed by Molson Coors, and comes in a presentation box. In fact, the box is probably the only reason I’ve kept it this long. The label describes it as “a golden beer with hints of honey and caramel like sweetness, perfect for a celebration”. 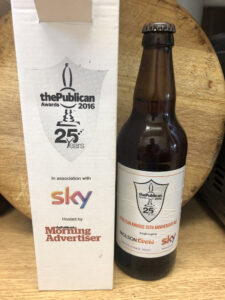 It also says the beer should be kept refrigerated, which it hasn’t been. However, given that it’s in a brown bottle and has been in a box for the past four years, and stored in a cool place, this could be interesting. In theory, most of the right things have been done, more by luck than judgement, to keep this beer in decent nick.

It should be emphasised clear, though, that given that it hasn’t been stored under recommended conditions, whatever’s coming next is no reflection on the brewing skills of the very lovely people at Molson Coors, and the tasting is undertaken entirely at my own risk.

Aroma: There’s a very reassuring hiss of CO2 as the cap comes off, showing that something is still happening in the bottle. An initial sniff reveals a healthy malt character, with more than a hint of what I call “last night’s beer”. When I was growing up in south London, a pub that opened its doors in the morning to let in both the fresh air and the cleaners would give off that aroma, and it’s one I always find very evocative, in much the same fashion that Marcel Proust would come over all unnecessary when a madeleine was waved under his nose.

After a few seconds, a thick foam creeps out of the bottle neck, another indication that there’s life, if not necessarily as we know it, inside. Once in the glass and given a swirl, there’s a sweet aroma behind the malt, similar to the caramel sweetness of a bourbon whiskey, along with a lovely touch of raisin.

Appearance: There’s a strong head when the beer is poured, which lingers on the inside of the glass. The beer itself is a light orange/gold colour, and while not totally clear, it lets the light through and is certainly far from cloudy.

Taste: Here goes. Thankfully, there’s very little wrong with this beer at all. It has a light, carbonated mouthfeel with a sherry sweetness and slight honey richness 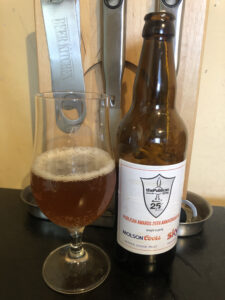 giving way to a spicy hop character. The flavour lingers, with both the sweetness and spice staying around for a while. Just at the edges, there’s maybe a slightly stale, papery quality, but certainly not enough to spoil the experience.

So what have we learnt? When stored correctly, there’s no reason a well-brewed beer shouldn’t be kept for quite a while past its best before date. For health & safety’s sake, I’d suggest that any beer that gives off an unpleasant aroma or is too murky should be poured down then sink, but this was a pleasant surprise. Cheers!