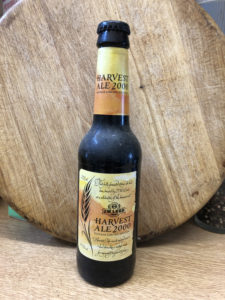 Like many jaded hacks, one of my initial thoughts on being told to stay at home as the coronavirus took hold was, “well, that’s a chance to do a bit more blogging”. Inevitably, I reasoned, the multitudes sitting on their sofas with the thin end of bugger all to do, scrolling dead-eyed and listless through their phones, tablets and laptops, would be enlivened by my thoughts on …what? On beer? Why?

As anyone who has ever had the good fortune to listen to me speak, loudly and at length, on the topic over a pint or two can attest, I tend fairly strongly towards the view that there’s already quite a lot of unnecessary beer writing out there. Not beer journalism, of course, which is what I’ve done for thirty-odd years. That’s completely fine.

Interview brewers, publicans, chefs and restaurateurs, and summarise their views for readers, by all means. Pass on practical advice on tasting, ranging and matching beers. Analyse trends and deconstruct sales figures to help interpret what’s happening in the market. All good. That’s proper journalism.

With my Beer Sommelier hat (well, badge) on, I even stand up regularly in front of groups and talk them through the history of beer, explaining various styles and flavours, and leading tastings to help develop a vocabulary around beer tasting – an area where mainstream beer drinkers are still very poorly served compared to wine.

There is, however, always a tendency to pontificate and prescribe, and it’s a line that I dad-dance back and forth across as easily as anyone else, once the sinful rhythm takes me. With beer as with music, though, my principle is tell me what you like, but please don’t tell me what I like or why I should like it. When I do cross that line feel free to point me back over it as firmly as you like.

So, like many beer wri … journalists … I’ve accumulated a fair number of bottles over the years which are probably now well past the point where they should have been drunk. My plan was – and still is – to crack them open one at a time and share my thoughts on how they’ve held up.

However, events intervened, and 48 hours into the shutdown, I was sipping my morning coffee and realised that I couldn’t taste or smell a bloody thing. While that’s one of the symptoms of the virus, like most of us, I have no idea what I’ve had, and until we can all get tested, what I might be immune to.

Move on two weeks on, and as my tastebuds tentatively sprung back into life, initially I could distinguish sweetness, then salty character and finally other savoury flavours. Having not had a beer for a fortnight during my affliction, I decided to test my recovering palate with a bottle of Banana Bread Beer, from the Eagle Brewery in Bedford, which had been knocking around in my stash for a while. Flavoured with Fairtrade bananas, the tasting notes describe it as “an inspired brew” in which “tempting banoffee aromas and flavours are balanced by the silky richness of a masterful malt blend and the peppery spice of the freshest, ripest hopes”.

Personally – and I stress, this is my view alone– I think it’s a genuinely unpleasant beer which could only have been the result of an ill-fated bet between the marketing department and the brewery night shift. However, I reasoned, that made it the perfect to beer to taste in order to check whether I was on the mend. As I poured the bulk of it down the sink moments later, I reflected that I was, sadly, right.

Confident that the well-honed, coiled spring that is my palate is back in something like working order. the plan is, then, that I’m going to crack open a few of those older beers over the coming weeks, give them a go and share my thoughts. Some may taste sublime, some OK, and some, I fully expect to be to be quickly headed drainwards. 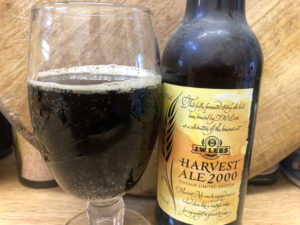 To start, I’ve selected a bottle of the 2000 vintage JW Lees Harvest Ale. In its 20 years of life, this particular bottle was originally sent to the offices of the late, much lamented trade paper The Publican, and was subsequently appropriated by me during one of the regular office clear outs. I’ve kept it cool and out of sunlight, but I can’t speak for how it might have been treated in those early days in the old Publican Croydon office. Going by my own experience, I have to assume it was vastly underappreciated, poorly remunerated, and had plenty of bullshit thrown at it.

I’m deliberately not looking up the tasting notes for this, or any other of the beers in my archive. From the information on the label alone, I can tell you that it was bottled at 11.5% and made with Maris Otter barley, East Kent Goldings Hops. It was brewed in open copper fermenting vessels at the JW Lees’ Greengate Brewery in Middleton, Manchester, and brewed with Lees’ own strain of cervisiae yeast.

Aroma: On opening the bottle, there’s a reassuring puff of vapour that tells me that the carbon dioxide created by that yeast during the brewing process is still very much with us twenty years on, a good indicator that there’s life in the beer. A deep sniff pulls out strong raisin aromas, as well as some treacle notes, and more than a touch of dry sherry. There’s also a slight character of the tobacco and well-worn leather of the smoking room of a gentleman’s club – perhaps a tad stale, but very far from unpleasant.

Appearance: As it pours, the beer clearly has plenty of oomph in it. It initially has a dark character, moving slowly from the bottle as befits a veteran that has been unexpectedly disturbed after a long slumber. Held up to the light, it has excellent clarity and a chestnut brown colour. The carbonation creates a delicate, light brown head that sticks to the side of the glass, and quite justifiably trickles back down in its own good time.

Taste: Here goes. Oh bloody hell, that’s beautiful. Sweet, with those raisin and treacle flavours at the forefront, and the character of a strong, two-sugars, milky coffee lingering – possibly for some time to come. It’s certainly staying with me, and very welcome it is too. There’s a lovely, warm alcohol glow that’s also not going anywhere quickly. The second and final pour is much murkier, with a generous helping of yeast decanting from the bottom of the bottle despite my impeccably professional pouring technique.

This is a wonderful beer, and all credit to JW Lees for creating something that has withstood, as I say, several moves and not necessarily always the due care and attention it deserved over the past 20 years. 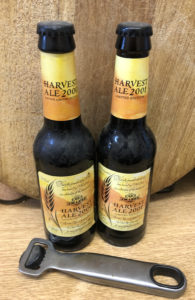 I’m delighted to say that I’ve still got one more bottle of the 2000, as well as one of the 2001 vintage, in the stash. On the basis of this experience, I’ll think hard  about the right occasion to open them.

For my next selection from the … ahem .. cellar, though, I’ll try to find something a bit different. Stay tuned