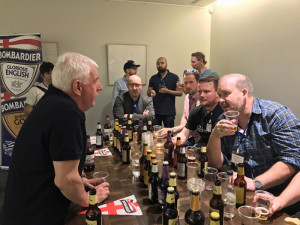 The query, which I was most recently asked when I hosted a beer tasting for delegates to the Dads Network Live event in London recently, isn’t that uncommon in in one form or another. Even people familiar with the role a wine sommelier plays in the on-trade – and that’s far from everyone  – can be incredulous.

In a counter-intuitive way, this scepticism shows just how important beer is to our culture. People can  appreciate that they might need the services of a sommelier to help them select wine to go with their meal, not only because wine is seen as a premium, artisan product, but also because the wine industry has also done an admirable job of building prestige and mystique around what is, ultimately, grape juice that’s gone off.

Beer on the other hand, is a victim of its own ubiquity. It’s everywhere, so why would anyone need help choosing a beer? The answer is, of course, that beer is just as complex and diverse as wine in terms of its heritage, flavours and range of styles. The combination of four ingredients – malted grain, hops, yeast and water – opens up infinite possibilities. The 2017 beer judging guidelines drawn up by the US Brewers Association recognise 152 separate beer styles.

If, as consumers, we’re drink-literate enough to understand that red wine goes with meat and white with fish, then why can we not appreciate the sublime match of a pint of malty best bitter with a tangy ploughman’s lunch, the wonderful combination of a hoppy IPA with a spicy curry, or the crisp, citrus taste of an authentic pilsner with seafood?

The craft beer boom means that there are an increasing number of well-informed consumers who are ready to pay a premium for beer in the on-trade â€“ whether cask, keg, bottled or cannedÂ  – provided they are properly engaged and interested.

That puts an increased onus on operators to be able to show that they are serious about beer. It’s not simply about the mechanics of keeping and serving beer any more – although that remains essential – it’s also about demonstrating appreciation of the culture of beer.

So how did I get here? My background is as a journalist, and during my stint as food editor of The Publican, the much-missed weekly licensed trade newspaper, we were the first industry title to feature beer and food matching coverage regularly, assembling a panel of brewers, chefs, licensee and writers to consider matches for classic pub dishes and beer styles.

On the strength of that I began doing the occasional corporate and consumer beerÂ  education session, talking about beer styles, doing some practical beer and food matching and throwing in a few anecdotes about the history of beer in its place in global food and drink culture. Then, a few years ago, someone at an event asked me “are you one of these beer sommeliers, then?” I decided at that point that I’d better try to be.

So yes, it is a real thing. I’ve studied, worked with pubs and bars to build a portfolio of work,  tackled the blind tastings to identify styles, taken the exams, and I’ve been fully accredited as a beer sommelier by the Institute of Brewing and Distilling for several years. We may not have quite the heritage of the Union des Sommeliers, founded by wine stewards in Paris over a century ago, but we’re on the way.

Since qualifying, I’ve conducted beer education, training and food matching session in venues ranging from local pubs to upmarket restaurants, and even in the Playboy Club in Mayfair. 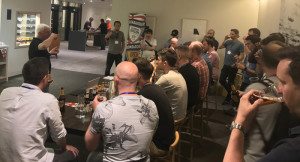 Of course, individual licensed premises can’t really be expected to have a beer sommelier on the staff, any more than all but the top restaurants and hotels have their own wine specialists on hand. There is, though, a real opportunity for the on-trade to work with beer sommeliers on a consultancy basis to help build a credible beer offer. Ways we can help include:

I should emphasise that none of this is intended to be po-faced – you really don’t have to be serious in order to take beer seriously. Going out for a beer and a bite should always be fun and informal, not a chore.

However, today’s consumers have a wider range of choice than ever, including simply staying in with a supermarket ready meal and a six pack. By offering a beer experience that is more interesting and enjoyable that anything customers can experience at home, on-trade operators can retain their edge and build additional trade. Cheers!